The Infected Giants are special Infected.

"The corrupt body of this infected person has swollen to an enormous size. Its thick skin makes it almost invulnerable to low-caliber weapons."

An Infected Giant swipes back and forth in front of himself with his huge arms. This AoE attack can kill dozens of Rangers in a single swipe.

The Infected Giant only appears at difficulty "Medium Population (Challenging)" and higher.

In the campaign, their health varies from 4000 to 20000 depending on the difficulty.

Due to their high health pool, it is highly advised to bring a team of snipers to deal with Giants (preferably vets). Their high single target damage ensures that the Giants health goes down quickly. It's also advised to have a ranger kite the Giant due to its speed. 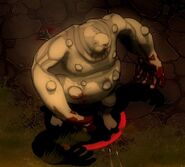 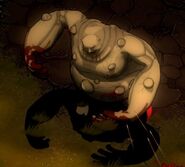 Add a photo to this gallery
Retrieved from "https://they-are-billions.fandom.com/wiki/Infected_Giant?oldid=3242"
Community content is available under CC-BY-SA unless otherwise noted.